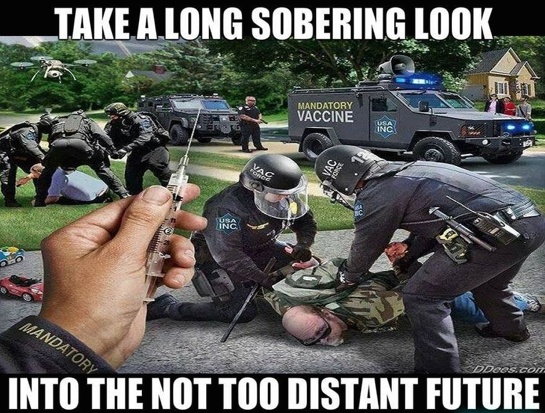 We are moving to step 5. Mandated MRNA vaccines are coming. The fear campaign of Covid has failed. People are not scared any longer of Covid, but that’s not the problem anymore and truthfully Covid never was.

The problem is now that Covid failed and you are seeing this chess game of totalitarian control unfold, let me tell you what is really coming. If this is a mandatory vaccine campaign and it gets rolled out rapidly, you better be aware, educated and terrified.

Globalists in the next 2-3 months will magically find the cure for Covid and roll it out in a mass vaccination campaign. This vaccine is MRNA vaccine. This roll out will come out very fast for two reasons. 1) so that you have no choice but to comply, your stuck in your house and you’ll beg for it to get out. 2) so the side effects are not revealed until the vaccine has been widely distributed.

Why is this relevant?

Well, MRNA virus carry the instruction to replicate and build its viral protein right away. It doesn’t require anything other than the host cell machinery to operate. In other words, it cuts down the manufacturing process significantly.

Why is that a problem? Well, MRNA has direct coding. It will do what they are programmed to do. In this case the RNA cause direct DNA mutation which leads to cancer, they can change your emotion, give you autoimmune diseases, autism, anything that it is programmed to do.

There is no coronavirus vaccine and there never will be one. You think that you are getting a vaccine for immunity, when in reality it’s a trojan horse for something different. This is real. I never thought in my life this would ever be real. Just because we can manipulate biology in ways doesn’t mean we should. I left research biology for ethical reasons. Bioethics is a major problem. Data is falsified for the sake of rapid profits. I have personally witnessed it.

This announcement is a distraction.  What do we mean by that?  Since USA, Inc. is a corporation and has setup the court system for the corporation it is again leading injured vaccine victims and those that KNOW the vaccines cause damage and death into a rigged corrupt corporate illlegal system.

END_OF_DOCUMENT_TOKEN_TO_BE_REPLACED

You really cannot make this up. I haven’t had a free moment to even send a newsletter out to my hundreds of thousands of readers with an update.

END_OF_DOCUMENT_TOKEN_TO_BE_REPLACED

In order to renew the DNI, passport and registration, the complete vaccination card must be presented.

n order to renew the DNI, passport and registration, the complete vaccination card must be presented.

According to the text itself, it will be the Executive, through the Ministry of Health of the Nation, which must regulate in a term of 120 days the fine print of the norm for its specific application.

(Support Free Thought) – Australia’s Minister for Social Service, Dan Tehan, announced July 1st, the Australian Government will monetarily penalize any citizen whose children are not up to date on their vaccinations. The penalty, in the form of a reduction of government payments, amounts to $56 (AUD) monthly.

Called the “No Jab No Pay” program, Australia aims to increase compliance with government mandated vaccination programs by taking money away from its citizens. Parents who refuse to vaccinate their children may continue to do so under religious or medical grounds, but will not be allowed to keep the money they were previously receiving from the government.

No Jab No Pay appears to be working. According to Tehan’s press release:

Since the Turnbull Government introduced No Jab, No Pay in 2016 about 246,000 children and their families have taken action to ensure they meet the immunisation requirements.

Reasons for financially penalizing its citizens are for safety, according to the Minister of Social Service. Tehan writes:

Immunization is the safest way to protect children from vaccine-preventable diseases.

It is no question that the subject of vaccines is profoundly controversial. On both sides of the argument exists truth and lies that can hinder the ability of some to make rational decisions.

While we have everyone from attorneys to biologists, to political scientists who write for the Free Thought Project, none of us are doctors, so we do not make recommendations about what you and your family should do in regards to vaccination. It is important to note, however, that this information is almost always absent from the mainstream media which is why we find it necessary to report.

Fullly-funding the vaccination program, the Australian government provides over 14 million dollars annually to help parents catch-up on their vaccinations. Yet while Australia, as well as many governments around the world are more than happy to fund vaccinations, the practice of injecting the world’s children with inoculations manufactured by the pharmaceutical industry is disturbing to many, and they’re not antivaxer quacks as unscrupulous reporting by IFL Science purports them to be. Presumably comparing them to rats and cockroaches by slanted word choice, IFL Science writes:

Anti-vaxxers have infested the Southern Hemisphere

The characterization of antivaxers is likened to WWII-era caricatures of the Jew, a rat-like repulsive view of people who are sincerely trying to protect their children from potential adverse reactions. Even doctors who provide medical exemptions for the vaccination of certain susceptible patients are caught up in vaccination shaming and governmental penalization.

As TFTP reported last week, California’s Robert Sears, MD, was placed on probation last week after he provided his medical opinion vaccinations would be too risky for his patient, a 2-year-old boy whose mother said he suffered severe reactions to a previous vaccine.

As a consequence of his medical decision to exempt a patient from government-mandated vaccines, Sears was punished and is now subjected to intense scrutiny of every medical decision he makes, simply for standing up for the overall health of one of his patients. In a Facebook post he explained he agreed to the probation in lieu of a costly court case where he may have actually lost his license to practice medicine altogether.

Mocking antivaxers for refusing vaccines on the basis of religious or medical reasons, and penalizing doctors’ medical decisions runs counter-productive to preventing and minimizing actual risks associated with vaccines.

As TFTP has reported, the U.S. Government has paid out well over 3 billion dollars in damages to citizens who claim vaccines caused them harm and even death. Known as the National Vaccine Injury Compensation Program, the program lists a myriad of complications with which those who receive vaccines can become afflicted.

Those payouts have time-limits established from the time the onset of symptoms occurred to the time a payout can be requested. Often, the sick do not put two and two together, that their vaccine has made them sick, in time enough to file a request for compensation for damages.

Last year, an Arizona nurse we will call “Andy” took the flu vaccine. The hospital where she worked forced her to take the flu vaccine, even though she objected, and threatened her with the loss of her job if she didn’t kowtow to their demands.

Immediately after taking the flu vaccine she developed debilitating complications. Chronic pain, weakness, numbness tingling, and subsequent depression set in. She was diagnosed with Chronic Inflammatory Demyelinating Polyneuropathy caused by the flu vaccine she contends. She can no longer work as a nurse but is not about to give up her fight. She’s suing the hospital as well as the manufacturer of the flu vaccine for the very real damages she’s sustained.

The story of the history of vaccinations demonstrate the power Big Pharma has over the people. Not only will CDC scientists lie, omit, and cover-up the fact some of these vaccines are not safe but they will demonize and penalize anyone who disagrees with their findings. All the while they quietly pay billions in damages to victims of bad medicine.