https://www.veteranstoday.com/2019/02/18/china-looks-to-secure-space-superpower-status-with-earth-orbiting-power-plants/
EXCERPTS:
–  China plans to construct a series of space-based solar farms
–  China’s solar farms are expected to be built and launched between 2021 and 2025 (with larger, 1MW-size stations planned for 2030+) will be able to supply energy back to Earth at six times the intensity of solar farms back on Earth
–  China’s solar farms in space will have an inexhaustible source of clean energy for humans – with power transmitted by microwave or advanced photonics, and transmission unaffected by our planet’s day/night cycle and terrestrial weather.
INSIDER COMMENT:
It is MOST important to understand what this space-based solar farm is REALLY all about.

END_OF_DOCUMENT_TOKEN_TO_BE_REPLACED

But the erosion of California’s century-old utility monopolies has alarmed some regulators. They worry that without new safeguards, the shift from a handful of big utilities to a decentralized system with dozens of energy providers could have unintended consequences – possibly including a repeat of the state’s early-2000s energy crisis, when a failed experiment in deregulation led to rolling power outages and ballooning electricity costs.

One of the leading community choice skeptics is Michael Picker, president of the California Public Utilities Commission and a former renewable energy adviser to then-Gov. Jerry Brown. Picker has spearheaded a series of reports outlining potential risks posed by the rise of alternatives to the big utilities, not just CCAs but also rooftop solar, home battery systems and companies buying energy through a limited competitive market.

Solaren:  Utilities NEW Business Models:  Technology pushes utilities to new
SECRET business models . . . what you will not read below are the global
plans and signed contracts for solar beamed from satellites from space . .

END_OF_DOCUMENT_TOKEN_TO_BE_REPLACED

Solaren, Inc. is a Southern California startup corporation created to utilize solar energy for terrestrial electricity usage. In 2009, the company had a contract under negotiation with Pacific Gas and Electric Company of California to deliver 200 megawatts of power for at least 15 years., starting in 2016 The cost of the contracted activities has been reported as “slightly more” than California’s projected energy cost in 2016 of 12.9 cents per kilowatt hour. As of 2014, the planned delivery date has been moved back to the end of the decade.

Solaren plans to provide this electrical power to PG&E’s customers from solar panels mounted on satellitesplaced in Earth’s orbit. The satellite would convert this energy into radio waves and send it to a receiving station in Fresno County, California. The plan is to provide 200 megawatts of continuous power, estimated as the average usage of 150,000 homes.

If successful, this project would be the first implementation of space-based solar power (SBSP). The concept was first dreamed up in 1941 by science fiction author Isaac Asimov in his short story “Reason“, and was later described scientifically by Peter Glaser in 1968.

Kauai has rapidly adopted solar. In 2009, oil provided 91% of the island’s electricity. In 2015, solar provided 15% with other renewables providing another 22% with oil providing 63%. Diesel usage was expected to be reduced by 10 million gallons in 2016 compared to 2008. On some days in 2016, solar power provided 77% of the electricity generation on Kauai.
Tesla’s dispatchable solar+storage project in Hawaii brought online , UtilityDive, March 13, 2017

The largest utility-scale solar farm in Hawaii is the 27.6MW EE Waianae Solar Project which opened in January 2017.[4]

The energy sector in Hawaii has rapidly adopted solar power due to the high costs of electricity, and good solar resources, and has one of the highest per capita rates of solar power in the United States. Hawaii’s imported energy costs, mostly for imported petroleum and coal, are three times higher, and will soon be close to four times higher than the mainland, so Hawaii has motivation to become one of the highest users of solar energy. Hawaii was the first state in the United States to reach grid parity for photovoltaics. Its tropical location provides abundant sun energy.

Much of Hawaii’s solar capacity is distributed solar panels on individual homes and businesses. Hawaii’s grid has had to deal with this unique situation by developing new technology for balancing the energy flows in areas with large amounts of solar power. In 2017 distributed solar produced 913GWh which was 36% of all renewable energy produced in the state and about 9% of electricity sales. Utility-scale solar produced 212GWh, just over 1% of sales.In December 2016, Hawaii had 674MW of installed distributed solar capacity. The largest utility-scale solar farm in Hawaii is the 27.6MW EE Waianae Solar Project which opened in January 2017.

The electrical grids of the Hawaiian islands are each separate and relatively small. “Overbuilding” distributed solar in some areas has led to issues such as partial duck curve, although time-of-use pricing has reduced disadvantages. Such overbidding led the Hawaiian Electrical Company (HECO) to stop its net-metering program, which reimbursed solar consumers generously for the excess electricity they exported back to the grid, in 2015. As a result, residential solar installations fell as homeowners could no longer justify the costs because the payback time of the rooftop solar system made it cost-prohibitive. Two successor programs – customer grid supply (CGS) and customer self-supply – have proved less successful than net-metering did in promoting the growth of the industry. HECO has made connecting to the grid more difficult, leading to layoffs among the solar installation industry. In 2014, there were over 40,000 rooftop systems, over 10 percent of customers. A proposed grid interconnection between Oahu and Maui would have allowed more renewable energy but was rejected as too costly.

While HECO has severely limited homeowners’ ability to install solar and connect to the grid, the utility has gone full steam ahead with its own plans to build utility-scale solar, approving 110 MW on July 27, 2017.

Cyanotech has a 0.5 MW solar array on its algae farm at the Natural Energy Laboratory of Hawaii.

Kauai has rapidly adopted solar. In 2009, oil provided 91% of the island’s electricity. In 2015, solar provided 15% with other renewables providing another 22% with oil providing 63%. Diesel usage was expected to be reduced by 10 million gallons in 2016 compared to 2008. On some days in 2016, solar power provided 77% of the electricity generation on Kauai.

When it opened on November 2, 2015 on Kauai, the 12MW Anahola project was the largest solar project in Hawaii. It has 59,000 panels on 60 acres of land and is expected to supply up to 20% of the island’s momentary electricity demand and up to 5% of the annual demand. The Anahola project also incorporates a 6MW lithium-ion battery. The 12 MW Kapaia solar plant is connected to a 13 MW / 52 MWh battery, and the power is priced at 13.9 c/kWh. A 2018 project for 28 MW solar with 20 MW / 100 MWh batteries is priced at 11 c/kWh. A 44MW solar farm with batteries to be completed in 2019 will bring the island to 70% renewable electricity while a pumped-storage hydro facility is under consideration which could bring the island to 90% renewable by 2023.

In 2012 a typical solar system in Hawaii paid for itself in only 4 years, and returned a profit of over 4 times the cost over its life. Hawaii’s 35% ($5000.00 Maximum) state tax credit is the second highest in the country, behind Louisiana. Hawaii offers a feed-in tariff, but it does not meet the normal definition of a feed-in tariff, as it is less than the retail cost of electricity, and is therefore simply a Power Purchase Agreement. The Oahu Wind Integration Study released a report detailing the impact on the Oahu grid and found that 500 MW of wind and 100 MW of solar power could provide Oahu up to 25% of its electricity while eliminating the need to burn approximately 2.8 million barrels of low sulfur fuel oil and 132,000 tons of coal each year. 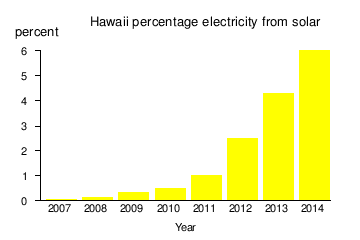 In October, 2018, Hawaii Electric Companies announced they were negotiating contracts on 7 new solar farms to total 260 MW, each incorporating 4 hours of battery storage:

It may seem like the stuff of science fiction, but is actually closer to reality than you may think.  Find out how researchers are boldly going where no watt has gone before.

Where the sun always shines

Solar radiation is the most promising form of space-based power. While a growing solar energy industry already exists, outsourcing to space could help solve a lot of issues. Land-based solar power is limited by night, cloud cover and the atmosphere. In space, the sun never goes away.

Solar panels in space would be attached to orbiting satellites or stationed on the moon. The electricity generated would be transformed to microwaves or lasers and sent wirelessly to earth, where it would be converted back to electricity.

This cosmic energy connection may seem a little far out, but the United States, China, India and Japan all have solar-based power projects in development.

Landing on the moon

The moon is another potential energy resource, Helium-3, an isotope found in abundance on the lunar surface, may one day help generate electricity using nuclear fusion technology. Unlike nuclear fission, which splits an atom, nuclear fusion combines the nuclei of multiple atoms to produce energy.

Nuclear fusion using Helium-3 has the potential to generate electricity with little waste and virtually no radiation. However, researchers still have to fine-tune the nuclear fusion process and find a way to economically mine, transport and refine Helium-3 for use in nuclear reactors.