REPOST: (Rep. James Traficant) The Bankruptcy of The United States 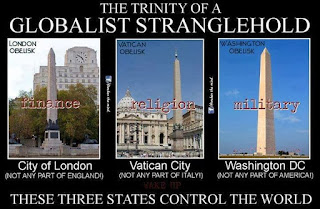 City of London – FINANCE: Receives taxes from their subjects (slaves) in Canada and the United States. They design and control our financial and banking systems.
Vatican City – RELIGION: The Pope wants to merge all the religions into one, which is absolute nonsense. The Pope broke off from the truth (confusingly referred to as The ‘Eastern Church’ or ‘Eastern Orthodox Church’ or ‘Orthodox Church’ or ‘Orthodox’) about 1000 years ago.
Washington DC – MILITARY: Death camps and stacks of black plastic coffins that can hold six to ten bodies each, are piled high in a long train-like fashion, as far as the eye can see, in the United States, today.

END_OF_DOCUMENT_TOKEN_TO_BE_REPLACED

Why isn’t the CFR in the History Books?

Hardly one person in 1000 ever heard of the Council on Foreign Relations (CFR).

The Council on Foreign Relations was formally established in Paris in 1919 along with its British Counterpart the Royal Institute of International Affairs. The Council on Foreign Relations and Royal Institute of International Affairs can trace their roots back to a secret organization founded and funded by Cecil Rhodes, who became fabulously wealthy by exploiting the people of South Africa. Rhodes is the father of Apartheid.

The Council on Foreign Relations was founded by a group of American and British imperialists and racists intent on ruling the world. Many of the American members were American intelligence officers that belonged to the first American Intelligence Agency — THE INQUIRY. Many of the British members were British Intelligence Agents. THE INQUIRY and its members, who included such notable Americans as Col. Edward Mandel House, Walter Lippmann, Isaiah Bowman, and James Shotwell, wrote most of Woodrow Wilson’s 14 points.