US Marines reveal plans for plasma crowd control weapon that can shout at people from 3,000 feet away – then be ‘turned up’ to temporarily blind and even burn them

The US Marines are developing a new laser weapon that can transmit voice messages at long range, or be turned up to deafen, dazzle or even kill.

The Scalable Compact Ultra-short Pulse Laser System (SCUPLS) will be mounted on a truck or tank.

It will initially be used as a non-lethal weapon for crowd control, according to US Government documents.

Scroll down for video 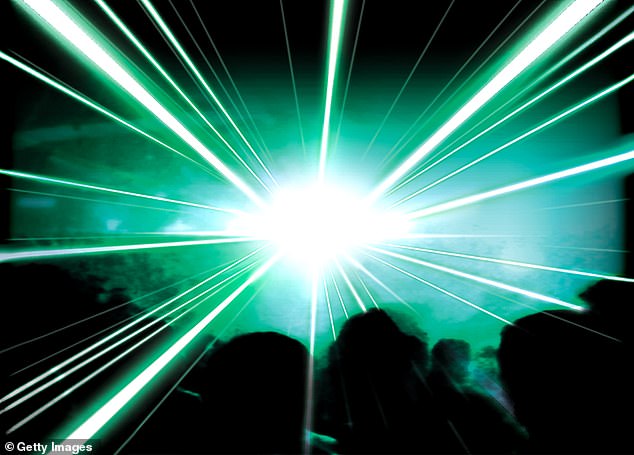 Using the different effect would allow operators to control crowds or enemies, first warning them before using the higher settings

WHAT IT CAN DO

The aim of the project is to ‘Develop a lightweight and energy efficient next-generation Ultra-Short Pulse Laser (USPL) system that can produce sustainable and controllable plasma at range capable of inducing a full spectrum of scalable non-lethal effects.’

The weapon works using an igniter laser, that fires an intense short pulse powerful enough to create a ball of plasma.

This can be created in mid-air, or on the surface of a target.

A stronger detonator laser then explodes the plasma ball, which can be used to create ‘enhanced non-lethal effects such as flash bang effects, thermal ablation for pain, and delivery of intelligible voice commands at range’ according to military documents.

However, the weapon could also eventually be used to kill.

The weapon can produce a range of effects.

At the lowest setting, the weapon can produce speech, and it will be able to warn people upto 1,000m away by delivering voice messages.

When it gets closer, the weapon will  deliver a ‘Flash-bang effect’ by sending an ‘acoustic blast of ~ 165+ dB at minimum distance of 100 meters’.

This would painfully vaporise the outer layer of skin – rather than burning it will be turned into gas.

Using the different effect would allow operators to control crowds or enemies, first warning them before using the higher settings.

The documentation for the project says it will ‘have direct application to many other U.S. Government agencies as well as civilian law enforcement.

US army successfully shoots down drones in laser weapon test

‘The ability to non-lethally interdict a threatening person or persons has utility in many security and crowd control applications to include several municipal applications.’

The plan is for SCUPLS to be mounted on a small vehicle, such as the Joint Light Tactical Vehicle (JLTV) or High Mobility Multipurpose Wheeled Vehicle (HMMWV).

The design phase should be completed in 2019, after which a prototype will be built and tested.