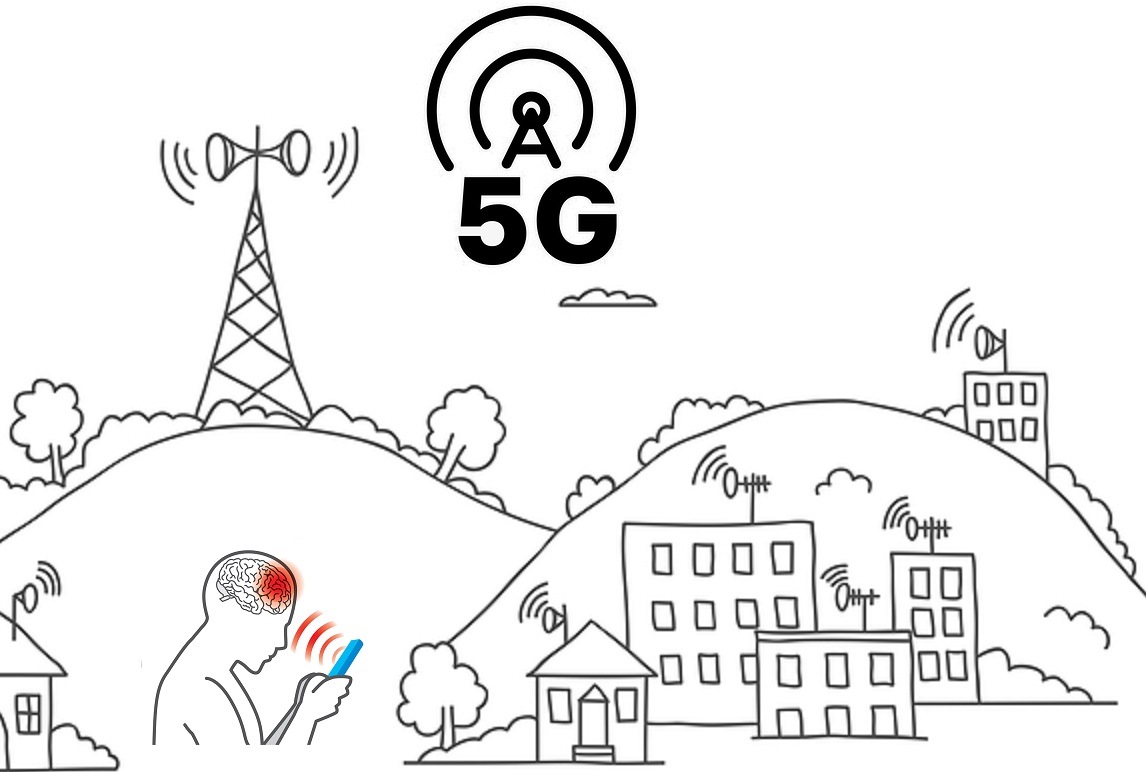 The new fifth generation (5G) cellular system that is being installed in major American cities such as Dallas, Atlanta, Waco, Texas, and Sacramento [1, 3] will intensify the microwave radiation health risks for everyone living in those cities. [2] 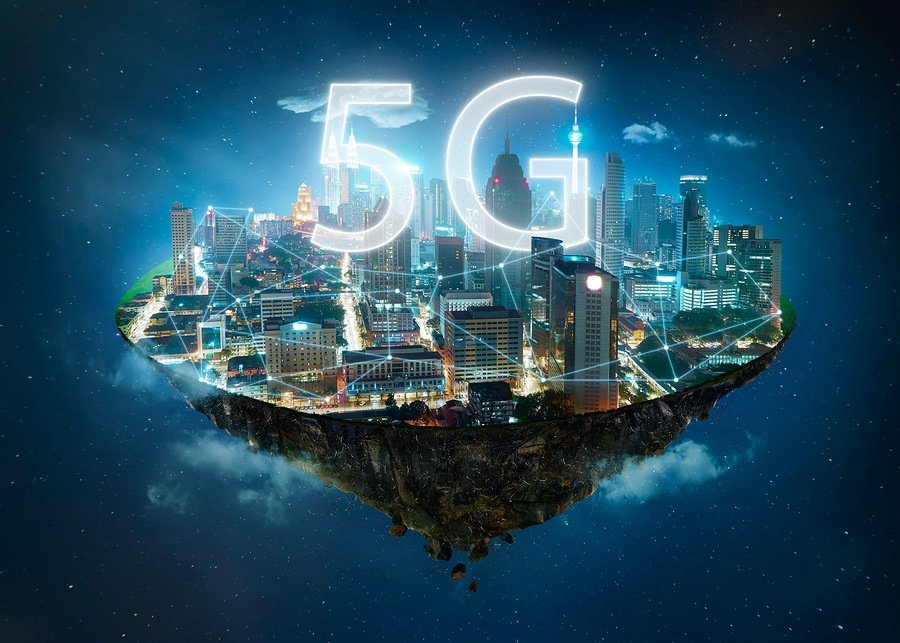 The new 5G cell systems that Verizon and AT&T are planning to install in other cities in 2018 [1, 3] will use shorter length microwaves than the existing 4G (fourth generation) systems. New generation cell phones will be able to communicate with either 5G or 4G microwave towers to optimize connectivity.

Copper phone lines will be replaced with 5G rooftop antennas on homes and businesses. These antennas will communicate with 5G cell towers and with the wireless equipment in homes and offices to provide phone and broadband services.

5G will be the foundation for the “smart cities” of the future. [15]

The Safety of 5G Has Not Been Tested

The microwave frequencies that are being used in this new generation 5G system are in the 1-millimeter wave length.

The long-term health risks of these short microwaves have not been adequately tested and the Federal Communications Commission (FCC) and telecom companies are simply presuming that they are safe based on 1996 research. [2, 16]

Research on microwave frequency radiation conducted since 1996 shows that the existing 3G and 4G cellular systems are causing serious harm to human health.

The 5G systems will increase the level of harm to the level where illness and death can no longer be denied. [16]

We now know that the development of cancer, heart disease, diabetes, Alzheimer’s and numerous other diseases and disabling symptoms are linked to the cumulative effects of microwave radiation.

Cellular systems are pushing microwave radiation into our bodies and brains 24 hours a day regardless of whether we use a cell phone or even own one. [4, 5, 16] 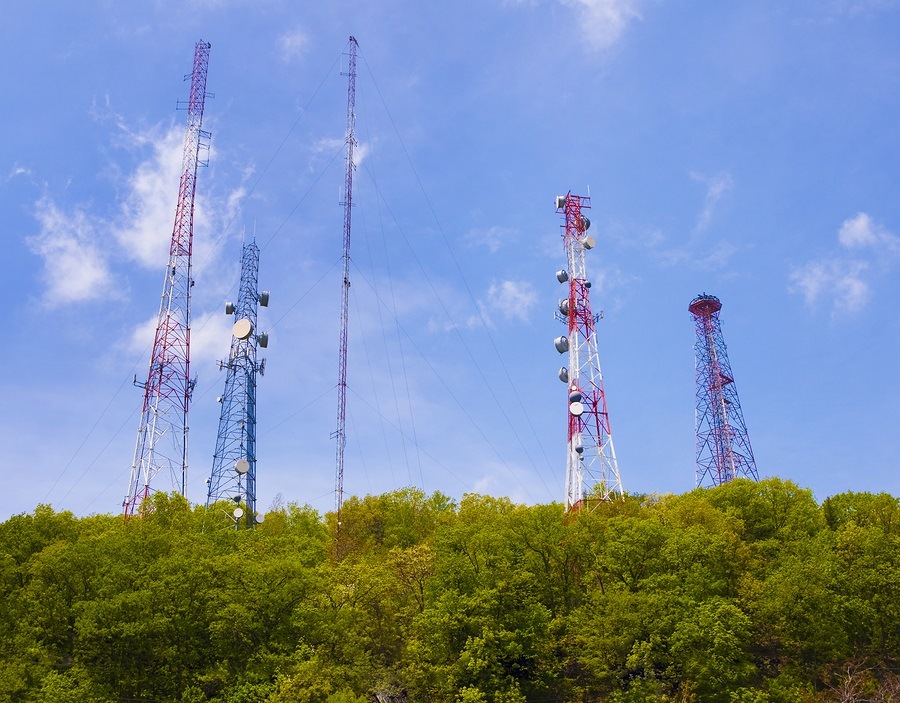 The 5G towers will be spaced approximately 500 feet apart and will be highly visible eyesores.

The “small cell” transmitters will be mounted on top of electric utility poles, municipal buildings, schools, and in city parks, on top of street signs, bus shelters, and anywhere else telecom companies wish.

In low lying areas they might need to erect new towers that are taller than electric utility poles to accomplish their objectives. Refrigerator size electrical boxes will be attached to each transmission tower. [2, 9]

If you live or work in a densely populated area where electrical poles are very close to buildings, then you might have a 5G cell tower located a few feet from your place of employment or your bedroom. [2, 9]

It is estimated that the daily microwave exposure generated by the 5G system will be equivalent to living inside a microwave oven and turning it up to high and baking yourself for 19 minutes a day. [2]

FCC regulations [11] make it illegal for government entities to try to delay or stop cell tower installation on the basis of health risks.

Telecom companies can sue cities and states that attempt to use health concerns to impede their cell tower building plans. [2]

How Harmful is 5G? Can We Stop It?

The remainder of this article provides detailed information about the health risks of 5G and explains why the public and government entities cannot stop the rapid build-out of the 5G system despite the massive health risks.

It will link you to efforts in your state where telecom companies are seeking to enact legislation that will strip away all rights to object to cell tower placement on any basis.

My previous articles on microwave radiation dangers will provide background information to those who are not familiar with this topic. Please visit:

Smart Meters: Countdown to a National Crisis of Illness and Death

To learn about the history of wireless communication from the 1950s to the present, and how the technology works, please watch this video: 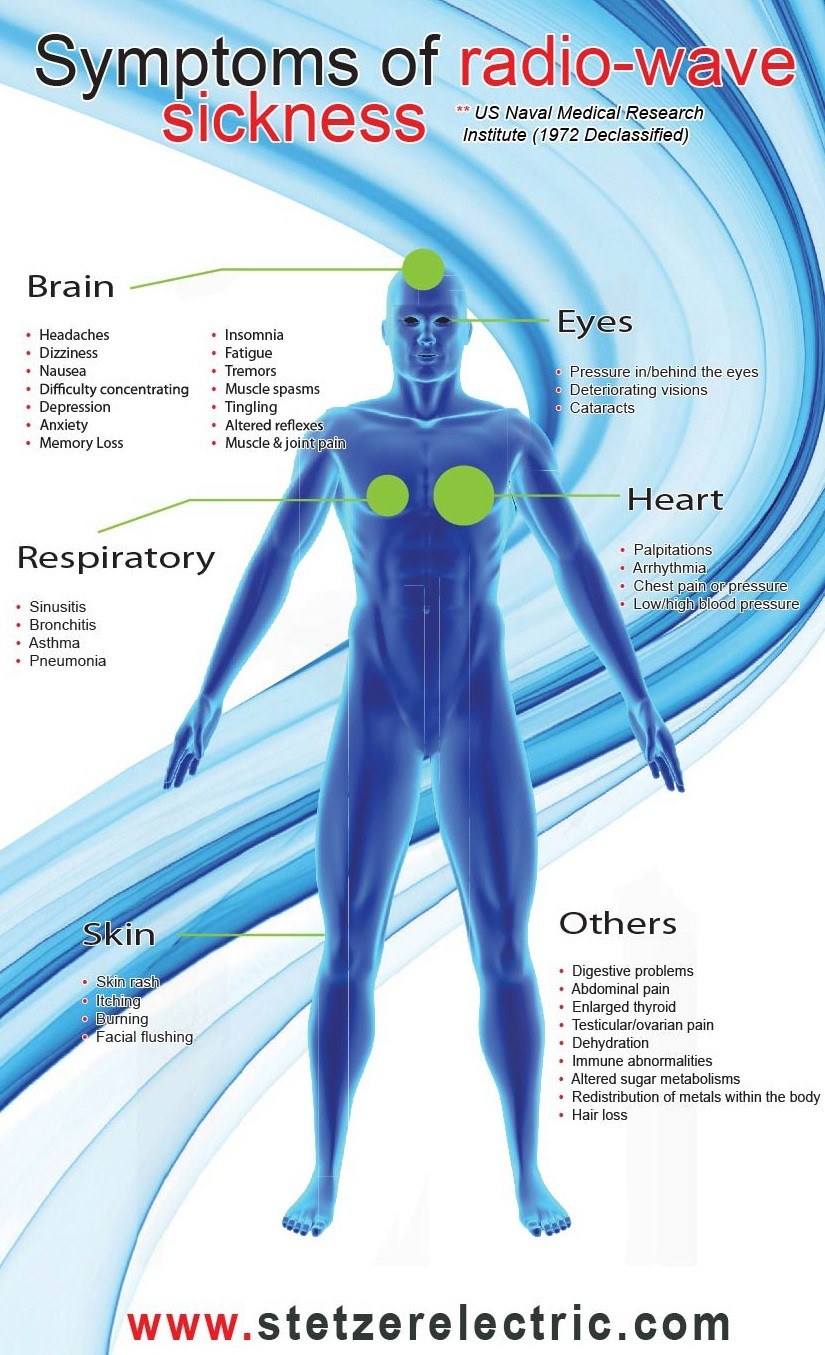 The following three lists present the symptoms, illness indicators, and diseases that are linked to microwave frequency exposure from cell towers, Wi-Fi transmitters, and other microwave generating devices. [8, 12, 16]

Symptoms of Damage: These are some of the common symptoms linked to microwave exposure.

Hidden Illness Indicators: These are some of the indicators of poor health resulting from prolonged microwave exposure. We are usually unaware of these threats to our health.

The bottom line in microwave frequency radiation exposure is, “The longer the exposure, the more deadly the cumulative effects.” [8]

In 2011, Professor Karl Hecht from the International Research Center of Healthy and Ecological Technology in Germany reported three distinct phases of illness caused by microwave radiation.

During the first phase, lasting up to 3 years, the living organism struggles to cope and compensate for the exposure to microwaves. [8]

They may experience numerous symptoms and may be aware of illness indicators, but aren’t able to fix their problems unless they stop the exposure.

3 to 5 years of Microwave Exposure

Professor Hecht described the damage that occurs during the second phase of exposure – 3 to 5 years of microwave irradiation. He stated:

This means overactivity or irritability of the vagus nerve, adversely affecting function of the blood vessels, stomach, and muscles. It also means that the parasympathetic autonomic system is overactive, while sleep disorders and daytime tiredness are common.

In its most severe form, this phase may include a chronic disturbance of mood called dysthymia (depressive neurosis) in which a depressive mood accompanies the other physiological features listed here.

This might explain why millions of Americans need anti-depressant drugs and illegal narcotics to cope with their radiation-induced depressive symptoms.

By this end of this stage, the systemic damage may be irreversible, even if the radiation exposure ceases. [8]

5 years or more of Microwave Exposure

According to Professor Hecht, during the third Phase (5 years or more), the body degenerates into exhaustion and severe states of disease. He stated:

People who have progressed to this phase suffer a dramatic increase in chronic illnesses and elevated cancer incidence.

A 2016 study by researchers at Emory University confirms that over one half of the US adult population is now chronically ill: “The health of individuals is increasingly being defined by complexity and multi-morbidity, the co-occurrence of two or more chronic medical conditions.”

However, not one in a million would guess that the mortal misery of cancer, heart disease, diabetes, Alzheimer’s and even depressive mental illness, is inextricably connected to years of covert irradiation delivered by crafty Wi-profiteers who have been laughing all the way to their gold-lined vaults. [8]

Videos Explain the Harm of 3G, 4G and 5G

They Do NOT Want You See This!! – Cell Phone Towers Exposed! – YouTube:

The FCC Says we have Nothing to Fear

This is the logic followed by the FCC to ensure safety — as long as the transmission of cell towers don’t exceed the microwave radiation levels they set and cell phones don’t exceed FCC standards, then the towers and phones are safe.

They have decreed that 3G and 4G towers operate at safe levels, therefore, the new 5G towers are also safe, because they use less powerful transmitters.

The FCC isn’t taking into account the proximity of transmitters and the biological effects of the shorter wave lengths. It is as if they believe that a tower that is 30 feet away from a person is less harmful than a tower that is 20 miles away.

Both beliefs are false!

Instead of focusing on long-term and cumulative effects of microwave radiation exposure, the FCC keeps talking about the heating effects of cell phones. [6, 7]

It is not the heating of body tissue that should be our major concern. It is the 24-hour – 7-days a week – 365-days per year exposure to microwave frequency radiation that is literally the killer. [8]

Public Entities that Delay 5G Implementation can be Sued

1996 FCC regulation permit telecom companies to sue any municipality or state that prohibits the implementation of cellular service on the basis of health.

New FCC regulations adopted in 2017 have further weakened the opportunity to resist the plans of telecom companies to implement wireless systems for other reasons.

President Trump has even signed an executive order permitting 5G towers on public lands to fulfill the national priority of building the fastest cellular system in the world. [10]

Telecom companies are planning to implement the 5G system in every major city in America by the end of 2020.  As it stands right now, they have the right to do so regardless of health concerns.

Telecom Companies Seek State Regulations to Give Them Even Greater Freedom!

Telecom companies are currently working in most states to establish rules that will give them complete freedom to implement their 5G systems.

They want statewide legislation that will prevent municipal governments or planning boards from delaying their 5G building program because of aesthetic concerns or zoning conditions.

Telecom Companies simply want to inform municipalities of their plans and then start putting up cell towers. [2, 9]

Some States are Not Caving in to Telecom

Not all states are rolling over and playing dead. Some are trying to maintain some level of authority with respect to the 5G rollout.

Sadly, however, the issue of health is a low priority, because of potential lawsuits from telecom companies.

Please use this link to find out what is happening in your state. It has an up-to-date summary of the issues with a list of legislation that is pending or has passed in many states.

Summary: Are Technological Advances such as Driverless Cars and Instant Downloads of Movies more Valuable than Increases of Disease and Premature Death?

Believe it or not, some research continues to show that microwaves are harmless. A 2017 study showed that when human skin cells in a culture were exposed to varying frequencies of microwaves for 3 hours, 70 hours, and 96 hours there were no changes. [14]

These are the kinds of silly studies that the FCC and Telecom companies use to prove 5G safety.

They would have observed damage if the scientists had looked at the right kinds of cells. T-cells and B-cells are highly sensitive and many will die after 8 hours of microwave exposure. They also might have found damage if they did a very close look at the DNA in their cells. [16]

The 4G system is actually still being enhanced and improved even while the 5G system is being installed and promoted. It is debatable whether the new 5G system will provide any more benefit to the average consumer than the current 4G system. [13]

The cost of 5G service should not be measured by the dollars invested by telecom companies to build their systems.

It must be measured in terms of the destruction of human health.

Are the promised technological advances such as driverless cars and instant downloads of movies more valuable than the occurrence of disease and premature death that these systems will cause?

“When will America become sick enough to understand that mobile Internet in the pocket is not worth killing and dying for?” [16]

[2] California is Fighting 50,000 New 5G Cell Towers Linked to Cancer Risk – Bills in THESE States Will Permit Their Installation in YOUR Backyard, AltHealthWorks.com, 2/12/2018. https://althealthworks.com/15057/california-is-fighting-50000-new-5g-cell-towers-due-to-cancer-risk-bills-in-these-states-will-permit-their-installation-in-your-backyardyelena/

[3] “Verizon to launch 5G residential broadband services in up to 5 markets in 2018,” Bob Varettoni. http://www.verizon.com/about/news/verizon-launch-5g-residential-broadband-services-5-markets-2018

[5] “They Do NOT Want You See This!! – Cell Phone Towers Exposed!” YouTube. https://www.youtube.com/watch?v=ii82I1IzFRY

[10] “5G wireless pits cities against telecoms and their friends in the FCC,” Allan Holmes, Center for Public Integrity, 3/9/2017. https://www.publicintegrity.org/2018/03/02/21475/5g-wireless-pits-cities-against-telecoms-and-their-friends-fcc