In October, Santa Rosa, Calif., came one step closer to pumping its treated wastewater into the ground. The city settled the fifth lawsuit threatening to block construction of a pipeline to carry the water east to the Geysers geothermal steamfield in Napa Valley. Injected into the ground there, the wastewater will replenish the steam that provides energy for cities in the Bay Area. Unfortunately, it will also create an undesirable by-product: many very small earthquakes.

Although some residents are concerned, the plan is attractive to power companies because the geothermal field offers steam for freewithout the need for an energy source to convert liquid to vapor. The field is like an open-face sandwich, with hot rocks at the bottom, a sandstone layer in the middle that holds steam in its pores like fat in bologna, and a thin layer of a caprock above that. The caprock keeps pressure on the reservoir of steam below, such that the steam continuously seeps up through the rocks on top. (In fact, there are no geysers in the Geysers; William Bell Elliott misnamed them in 1847 when he stum

That rate of production soon dropped, though, says Mitch Stark, a seismologist at the Calpine Corporation, “because the steam supply was no longer sufficient to keep up with all the new plants and wells that had been drilled.” By the late 1980s, companies had drilled about 600 wells. Today the field produces about 1,000 MW from only 350 wells. In 1999 Calpine bought out most of the other producers, “unifying the field” under one management strategy. Calpine runs 19 of the 21 powerhouses in the Geysers field; the Northern California Power Association, a group of towns that includes Palo Alto and Healdsburg, runs the other two. Calpine sends 850 MW of electricity into the grid, supplying power to Santa Rosa, San Francisco and other communities in the northern Bay Area.

END_OF_DOCUMENT_TOKEN_TO_BE_REPLACED 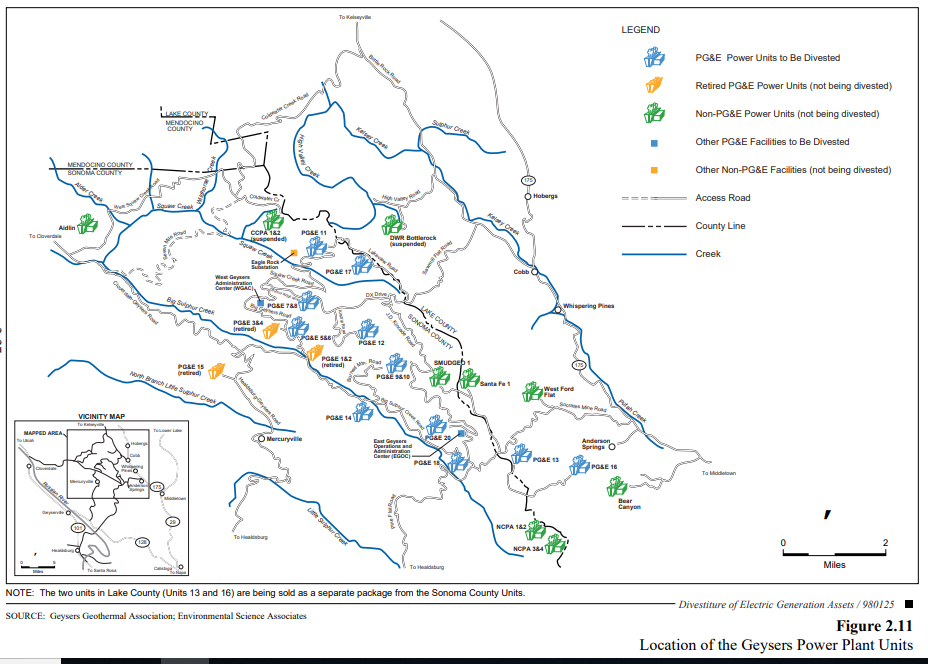 She reported on the Anderson Springs wastewater project. The Lake County Board of Supervisors signed a contract for construction of the collection system earlier this month.

The contract to actually build the facilities for each individual property including the grinder pump and holding tanks for the first 100 properties will go out to bid in the spring of 2018.

The Anderson Springs Community Alliance will host a community meeting on Jan. 27 at 1 p.m. the Middletown Community Center for updates on the wastewater collection system, warning sirens, emergency exit and other issues of community concern.

The focus of Coppinger’s presentation explained how Lake County’s recycled water pipeline to The Geysers has benefited Lake County users and replenished and stabilized the steam decline of the world’s single-largest geothermal resource developed for electric generation.

All of the effluent from the following plants is captured and conveyed to The Geysers:

Lake County provides an average of 5,000 gallons of treated effluent per minute to Northern California Power Agency and Calpine’s operations at The Geysers.

The contract Lake County Special Districts has to supply effluent to The Geysers guarantees a consistent amount of flow with the projected 20 years expected population growth initially allowing “make up water” to be drawn from Clear Lake.

However, with the housing collapse of 2008 and the fires of 2015 and 2016, draws from Clear Lake have remained high except for periods of California’s drought which caused reductions in water from Clear Lake.

During the heavy rains and flooding in January and February, the Lake County Sanitation District maximized flows of recycled water to The Geysers to avoid spilling from the treatment reservoirs that were overloaded due to the flooding.

Voris Brumfield is president of the Anderson Springs Community Alliance.