According to a report published by C40 global network, 70% of the megacities in the world including Delhi NCT that is committed to fighting climate change are already affected by climate change.

Currently, the global commitment is to limit the rising temperatures to 1.5 degrees Celsius which requires ‘rapid, far-reaching and unprecedented changes’ in every urban sector, as stated by the global warming report by the IPCC. A situation where the temperatures increase by 2 degrees Celsius will be regarded as deadly and catastrophic, first hitting the millions of the underprivileged people.

The report predicts that India and other densely populated countries that significantly depend on agriculture and fishery will be highly affected due to the high frequency of droughts and floods, sea level rise, and heatwaves.

At present, India’s National Capital Territory of Delhi or Delhi NCT is experiencing severe climate change impact with air pollution being the worst scenario in the city. The city with a population of about 19.8 million is expected to be the most populated city in the world by 2028.

Hence, at this point in time, Delhi NCT is in the position to gain full speed against climate change while taking care of the living standards of the millions of citizens.

It is rather pivotal to see how the densely populated mega urban centre – which is also the most polluted city in India – deals with the climate change phenomenon. The challenges are in fact an opportunity to demonstrate how a city can transform into a smart city!

In 2009, Delhi NCT began laying out an action plan to fight climate change. However, the action plan was submitted to the Union Ministry of Environment and Forest in January 2019, after a span of eight years. According to sources, the delay in submission was due to lack of coordination among the city agencies.

But recently, India’s Minister Harsh Vardhan stated that India did not wait for any report to understand the threat and showed all efforts in combating climate change.  (my comment – sounds like they were threatened with weather attacks).

To talk about Delhi NCT, the city has one of the world’s most successful smart initiatives to discontinue the use of diesel. Launched in 2001, the initiative focused on switching the diesel-powered public transport system in Delhi to natural gas at the direction of the Supreme Court of India. The Energy Resources Institute (TERI) was also promoting the use of ultra-low-sulphur diesel as an alternative. The initiative was led by the DTC buses which soon became the world’s largest CNG fleet operator. That said, the contribution also came from private buses, taxis and autorickshaws.

Imran Hussain, Delhi’s Environment Minister stated that the recently submitted action plan extended on how the climate over Delhi NCT could change over the next three decades. With that, it also has fixed targets for multiple departments on the goals that need to be achieved by 2030.

Furthermore, the action plan focuses on six vulnerable sectors with energy, transport and urban development predicted to be affected the most. As per sources, Delhi NCT is required to concentrate particularly on water conservation, drainage and energy. 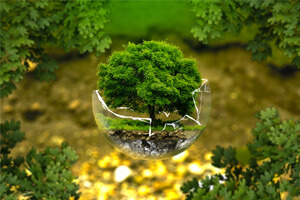 According to estimates, Delhi NCT will be generating about 15, 750 tons waste per day in 2021. This is going to impact the city’s waste-to-landfill disposition system further leading to air pollution and diseases. In fact, 60% of the city’s population is already suffering from respiratory illness due to dumpsites.

Hence, to address these issues, Delhi NCT is working towards transforming the waste management system. The initiative started with the development of Ghazipur Waste-to-energy Plant. The aim is to turn the so-called waste to energy, mitigate GHG emissions and clean the city that will eventually reduce illnesses and promote better living standards.

The Ghazipur Waste to Energy Plant is India’s state-of-the-art facility that was established in Delhi in 2011 with phase one completed in 2014. The plant is helping in creating energy out of the so-called waste and contributing to the nation’s vision to achieve 40% fossil fuel-free energy by 2030.

The facility processes more than 2,000 tons of waste every day.As a result, it generates 12 MW power and 127 tons of fuel which can be used in cement and power plants – as an alternative source. WHAT ? ? ?

The plant has hugely invested in air pollution control devices to stay in line with the European Industrial Emissions Directive. In addition, it has also deployed world-class technology from Siemens, Schneider, Keppel Segher of Belgium, SPIG, and BMH Finland among others.

As per estimates, the dumping of municipal solid waste at the Ghazipur dumpsite will reduce by 90% within 25 years. Apart from converting waste into energy the plant also works towards the betterment of the community. It supports a community centre that in turn provides support to over 200 local women who used to earn a living by picking waste with direct employment, artisan training and micro-enterprise support. PFA

The Ghazipur facility is not just contributing in reducing surface runoff but also reducing the instances of diseases such as dengue, malaria, and other eyes, skin, gastrointestinal and respiratory illnesses which are caused due to open dumping.

This waste management infrastructure is exploiting the double benefit by reducing waste and producing energy. At the same time, it is also supporting the local communities. This is a successful project that will be emulated with similar plants in Delhi and other Indian cities.

Converting Waste Into Compost And Fuel

To further speed up the reduction rates of CO2 emissions and move towards a better environment, Delhi NCT is converting municipal waste into compost and fuel.

The municipality of Delhi NCT partnered with IL&FS, Indian infrastructure development and finance company to open a plant that can process waste to produce compost and resource-driven fuel. The fuel is produced by shredding and dehydrating solid waste. As of 2015, the plant managed 200 tons of waste each day.

The city has collaborated with the Indian company Mother Dairy to supply the compost to farmers. Whereas the resource-driven fuel is supplied to cement manufacturing plants, aiding in reducing the need to burn coal.

250,000 tons of waste processed at the plant each time reduces GHG emissions that are equivalent to eliminating 1 million cars from the streets of Delhi for 10 days.

Apart from the initiatives mentioned, Delhi NCT has introduced multiple ones at the local level. These smart initiatives definitely inspire other smart cities.

There are many more smart initiatives that are introduced depending on air pollution levels in the city. Delhi NCT is one of the megacities in the world. Its efforts are surely going to influence other would-be smart cities in India and the world.