In partnership with MCAS Beaufort and the state of South Carolina, Marines volunteered to assist installation staff construct a living shoreline with oyster shell and bamboo stakes donated by the state government at the station’s Laurel Bay Boat Ramp.

Why? The Southeast is facing various changes, ranging from increased flooding, storm surge, coastal erosion, and extreme temperature and precipitation variations, to the effects of increased coastal population, urban sprawl and developmental pressures on coastal industries and activities. These challenges pose and opportunity for military installations, communities and organizations/agencies in the Southeast to consider the need for actions to improve resiliency.

How? Identifying the most significant risks and vulnerabilities due to these challenges, especially those that impact coastal military installations and communities in the region, will help determine how SERPPAS can effectively engage to minimize these risks.  This could include evaluating historically effective SERPPAS programs (species at risk, compatible land use, etc) and develop additional tools to assist with coastal resilience.

Listed below are websites containing information related to living shorelines. SERPPAS is interested in exploring wider use of living shorelines at those military installations where estuarine shorelines and the adjacent estuarine habitat could be benefited and the military’s long-term ability to use the property appropriately would be protected and enhanced. The purpose of the tagged resources below is to provide a guide for SERPPAS members and the public who wish to gather more information about living shorelines. Each website header is hyperlinked to a web address; additionally, you may find a summary of the types of content contained within each website below the header. This list is not exhaustive, and may be updated over time as new information is collected. A filtering function is also present and available for use so that the list of websites can be narrowed down according to content type.

Media captionValerie Rockefeller Wayne, chair of the Rockefeller Brothers Fund, spoke to the BBC about the decisionHeirs to the Rockefeller family, which made its vast fortune from oil, are to sell investments in fossil fuels and reinvest in clean energy, reports say.

The Rockefeller Brothers Fund is joining a coalition of philanthropists pledging to rid themselves of more than $50bn (£31bn) in fossil fuel assets.

The announcement was made on Monday, a day before the UN climate change summit opens on Tuesday.

Some 650 individuals and 180 institutions have joined the coalition.

It is part of a growing global initiative called Global Divest-Invest, which began on university campuses several years ago, the New York Times reports.

Pledges from pension funds, religious groups and big universities have reportedly doubled since the start of 2014.

“We are quite convinced that if he were alive today, as an astute businessman looking out to the future, he would be moving out of fossil fuels and investing in clean, renewable energy,” Mr Heintz said in a statement. 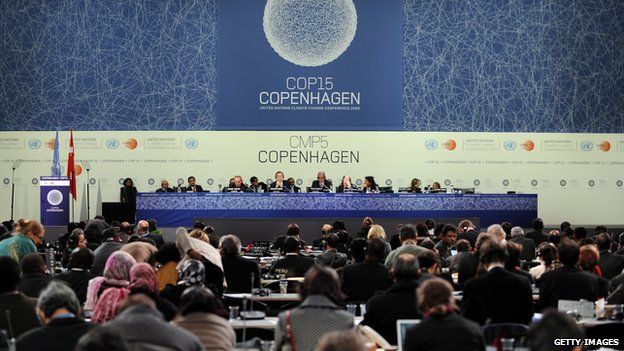 Image copyright Getty Images Image caption The last major conference on climate change, in Copenhagen in 2009, ended without resultsThe philanthropic organisation was founded in 1940 by the sons of John D Rockefeller. As of 31 July 2014, the fund’s investment assets were worth $860m.

“There is a moral imperative to preserve a healthy planet,” Valerie Rockefeller Wayne, a great-great-granddaughter of Mr Rockefeller and a trustee of the fund, is quoted by the Washington Post as saying.

A climate change summit is due to start on Tuesday at the UN headquarters in New York, with 125 heads of state and government members expected to attend.

It is the first such gathering since the unsuccessful climate conference in Copenhagen in 2009.

The event held to launch the Rockefellers’ news was more revivalist meeting than press conference. There was whooping, cheering, hollering and stamping of feet.

Archbishop Desmond Tutu appeared by video and told the assembly that the move was “a tipping point of transition to a new energy economy that was just and equitable”.

Rockefeller Brothers Fund director Stephen Heintz said dryly that “everyone noted the irony” that a foundation built on oil wealth would now be leading the charge out of fossil fuel.

Actor Mark Ruffalo, who also signed the pledge, told the conference: “These are not silly people, these are people who know how to deal with money.”

They recognised that clean energy was “the future”, he said – prompting more whooping, cheering and stamping of feet.

UN Secretary General Ban Ki-moon hopes leaders can make progress on a universal climate agreement to be signed by all nations at the end of 2015.

On Sunday, hundreds of thousands of marchers took to the streets in more than 2,000 locations worldwide, demanding urgent action on climate change and calling for curbs on carbon emissions.

Business leaders, environmentalists and celebrities also joined the demonstrations, which were organised by The People’s Climate March.

TORONTO—Even with a chilly mid-May breeze blowing off Lake Ontario, this city’s western waterfront approaches idyllic. The lake laps up against the boardwalk, people sit in colorful Adirondack chairs and footfalls of pedestrians compete with the cry of gulls. But walk east, and the scene quickly changes. Cut off from gleaming downtown Toronto by the Gardiner Expressway, the city trails off into a dusty landscape of rock-strewn parking lots and heaps of construction materials. Toronto’s eastern waterfront is bleak enough that Guillermo del Toro’s gothic film The Shape of Water used it as a plausible stand-in for Baltimore circa 1962. Says Adam Vaughan, a former journalist who represents this district in Canada’s Parliament, “It’s this weird industrial land that’s just been sitting there—acres and acres of it. And no one’s really known what to do with it.”

That was before Google.

This past October, a coalition of the Toronto, Ontario and Canadian governments contracted with Sidewalk Labs, a sister company of Google, to come up with a $50 million design for a dozen acres on the waterfront’s far eastern end. The idea is to reimagine Toronto’s derelict waterfront as “the world’s first neighborhood built from the internet up,” as Sidewalk describes it. The neighborhood, called Quayside, would leapfrog the usual slow walk of gentrification to build an entire zone, all at once, as a “smart city,” a sensor-enabled, highly wired metropolis that can run itself.

Toronto’s choice of the Google-affiliated firm immediately captured the attention of urban planners and city officials all over the world; magazine stories trumpeted “Google’s Guinea-Pig City” and “A Smarter Smart City.” Still in its early days, the partnership has left people curious but wary. Google? What does a tech company know about running a real live city?

What Is The 100 Resilient Cities Platform of Partners?

Ford and Autonomic are building a smart city cloud platform