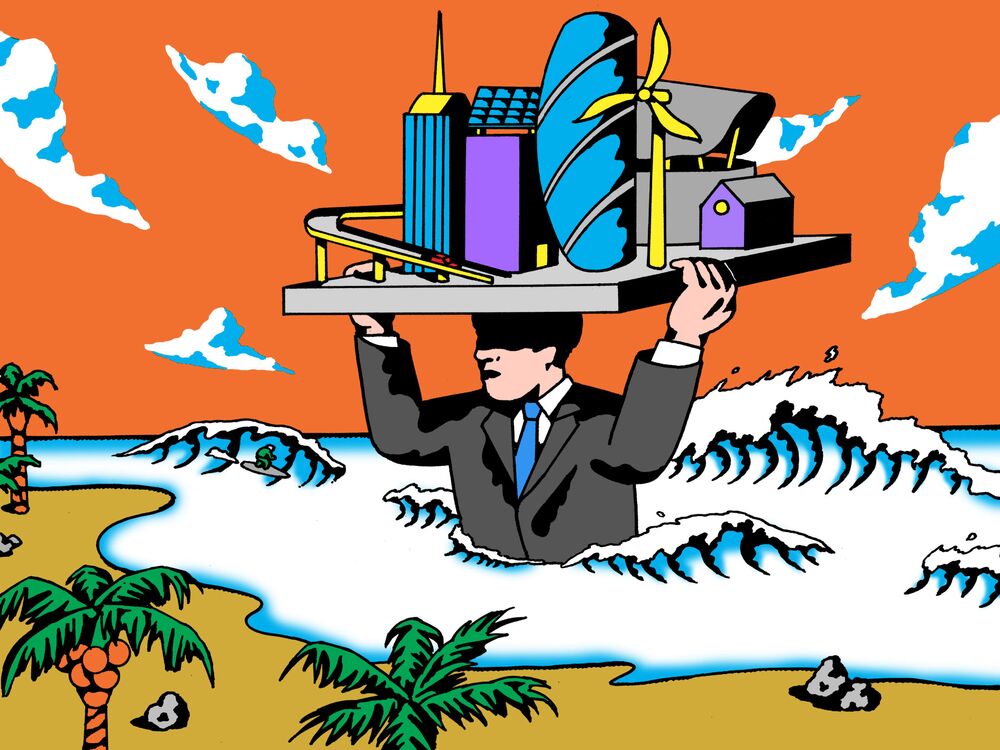 Patri Friedman is sick of the jokes about floating tax havens. About a decade ago, the former Google software engineer (and grandson of Nobel Prize-winning economist Milton Friedman) co-founded the Seasteading Institute, a nonprofit with the stated aim of developing a model for self-governing offshore communities. The idea was to allow people to set up more laissez-faire laws for themselves on mobile, artificial islands resting in international waters. An invaluable experiment, he calls it now. Also: “Baggage.”

The institute’s Silicon Valley backers most prominently included Peter Thiel, the conservative billionaire and future Trump adviser, and traded in no small part on Thiel’s imprimatur. But the effort was as impractical as it sounds, and it drew criticism from local leaders and good-government groups as a form of neocolonialism. In 2018 locals defeated a commercial spinoff’s attempt to establish a seastead off the coast of Tahiti. Seasteading, like vampirism, is now on the unofficial list of topics not to raise with Thiel, who hasn’t written the institute a check in at least five years. Nonetheless, he’s become the anchor investor for Friedman’s new venture capital firm, which is trying to create some similar-sounding communities on land.

Pronomos Capital, which Friedman incorporated in August, is supposed to bankroll the construction of experimental cities on vacant tracts of land in developing countries. Pronomos is set up like a venture fund, making investments in local organizations that do the work of securing government approvals, finding tenants, and hiring retired U.K. judges to enforce the new legal framework, to be based on British common law. The firm says it’s discussing semi-autonomous cities of varying sizes with foreign and local businesspeople in countries where officials have seemed receptive to exempting them from area laws, including Ghana, Honduras, the Marshall Islands, Nigeria, and Panama. A given community could start as small as an industrial park, Friedman says. Most will be aimed at foreign businesses seeking friendlier tax treatment.

While other organizations with names such as Free Private Cities and Charter Cities Institute are advising similar efforts around the world, Pronomos is the only one with seed money from boldface names including Thiel, venture capitalist Marc Andreessen, and Bitcoin evangelists Roger Ver and Balaji Srinivasan. In describing his new firm, Friedman isn’t shy to use seasteading as a reference point. “I’ve been putting these ideas out there for 20 years, and they’ve grown and compounded,” he says, sipping well water at his mountaintop compound south of San Jose. “What we get excited about is the ability to do this repeatedly.”

Why the colonial-sounding framework, right down to the old British laws? Dressed in a well-loved Slytherin sweatshirt, Friedman says it’s the best fuel for a fledgling economy and property values, and to assure global investors that their money will be safe in Pronomos projects. The justice system is more important than the tax breaks, he says, citing research that suggests faith in a functional code of laws is a leading indicator of a region’s economic success.

That’s been less than reassuring to politicians and residents leery of ceding land to unaccountable foreigners, in exchange for theoretical network effects. Fierce local opposition has halted a plan to create an independent area on a stretch of coastal land in Honduras, for example. The proposed tax incentives and other benefits for foreign investors were about as popular as you’d expect. “That land belongs to someone,” says Silvio Carrillo, the nephew of assassinated Honduran rights advocate Berta Cáceres.

Pronomos “will only go where we are wanted,” according to Friedman. He also says, with a straight face, that if Pronomos can get local officials to agree to its plans, “we have a credible shot at eliminating poverty.”

Friedman’s grandfather spent his life attacking government oversight in the field of economics, but his father, a law professor at Santa Clara University, has advocated for a kind of anarcho-capitalism on a legal basis. At age 43, Patri Friedman has pushed his family’s do-what-you-feel ethos to some other extremes, advocating for communal living, polyamory, and human-machine hybridization. He’s spent most of his career at Google, including his Seasteading Institute years. He left Google this summer to work full time on Pronomos.

“Do I want to create the first venture-backed city-state? Hell yeah”

The venture firm has raised about $9 million so far (more than half from Thiel), well short of Friedman’s initial goal. He says that’s only enough to cover basic fact-finding expenses for his local partners, and he’ll raise more to buy and develop land once governments approve the plans.

Similar ideas have gained some support beyond fringe libertarian circles. Honduras amended its constitution in 2013 to allow the creation of special economic zones outside the country’s legal framework. Erick Brimen, a startup founder who has coordinated development projects in Central America, is informally working with Friedman and others on Prospera Honduras, a local business advocacy group there. Brimen says it’s too early to discuss publicly. Other groups aiming for these kinds of extralegal territories have announced priorities including tax holidays and privatized health care and police forces.

“Our vision aligns” with Friedman’s, says Taavi Kotka, who runs an Estonian organization advocating for looser employment and tax laws to attract immigrants. “He’s a pioneer in setting up these special zones,” blockchain enthusiast Barak Ben Ezer says of Friedman. He and Friedman are working to turn the Marshall Islands into a tax haven similar to the Caymans. Friedman says he hopes to back more than a dozen projects in the next four years.

Yet even if Friedman and the other landsteaders can assuage concerns about colonial-style exploitation and the flouting of local laws, there are few guarantees in the world of quasi-sovereign states. In April a couple proclaimed their small fiberglass pod, 14 miles off Thailand’s coast, to be self-governing, and the Thai government sent its military to destroy the pod, calling their proclamation an act of war. (The couple is now working on a similar project in Panama, this time in cooperation with government officials.) That’s why, says Friedman, he’s making sure any Pronomos projects have local officials on board. Further out, “Do I want to create the first venture-backed city-state? Hell yeah,” he says. “That’s what I’m in it for. That’s the long-term goal.”

(Updated final paragraph to add new details about the couple who set up a pod off the coast of Thailand.)