An utterly remarkable and disturbing situation has transpired in the UK just in the last 3-4 days. Susanne Small (her Facebook name; see her posted FB video) was detained under the UK’s Mental Health Act on Monday because, during a 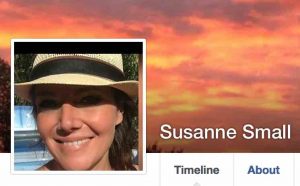 recent visit to her GP, the doctor had determined she was a risk either to herself or others. On Tuesday, she appeared in a special segment of the Richie Allen show, which is linked to below (30 minutes). It’s well worth listening to.

Activists are familiar with Susanne’s concerns over the health effects of 5G technology and its quiet rollout. We’re also familiar with other topics she raises such as Agenda 21/2030, the work of Debra Tavares, etc. This is clearly someone who has done relevant research and, as we are fond of saying, ‘gone down the rabbit hole’.

As you’ll hear in the interview with Allen, done via her smartphone from the actual hospital, she had compiled research on 5G and gone down to her doctor’s office with it, without an appointment at 8am, presumably when the office had just opened. She believed that certain symptoms she had been getting, 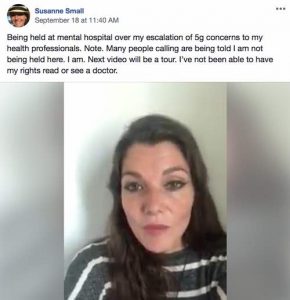 such as headaches, might be connected to cell towers, and had noticed a new large one had been installed in the neighborhood, although she was well aware that it wouldn’t have been operational at the time. The reaction from the doctor and staff was to basically send her on her way but leave the information behind, which she refused to do. During the subsequent consultation with her doctor, Susanne had the feeling that it was wise to leave, that the doctor had absolutely no interest in the research and viewed her as someone who was under a lot of stress.

A day later she experienced phone calls with withheld caller ID and had someone call on her at home. She refused to answer the door, and it was a day later – probably two days after the visit to the doctor – that police and mental health professionals arrived to detain her at a mental health facility.

Who decides that someone should be detained?

An emergency is when someone seems to be at serious risk of harming themselves or others. This can occur:

Notice how your home may be forcibly entered. Susanne had wrongly believed she was safe in her own home. The page also says that a person will be assessed and confined for up to 72 hours, but she may also be detained for up to 28 days under Section 2:

She is, however, hoping to be out by tomorrow (Friday), as she reports in the interview posted below.

It seems she had bombarded her doctor with information, probably too much as she readily admits. The mental health team had asked her about Donald Trump, whom she must have mentioned to her GP. Laughingly, she jokes to Richie, “thank God I didn’t mention MK Ultra!”. Probably it was also unwise to rush down to the office without an appointment. But as she correctly observes, even if an activist is using – unknowingly – what amounts to fake news or false information, that is still no indicator of questionable mental health.

Small is clearly informed, lucid and has a strong character. A UK doctor friend observed to me after listening to the interview below that while the GP had probably been overloaded with information, Small doesn’t sound like any sort of risk. Of an activist mindset, Small isn’t someone who is likely to back down. She’s been professionally employed for many years as she notes, and correctly observes that if it can happen to her, it can happen to anybody.